Is this for real?  Trade Whiskey?  Apparently so.  So what is trade whiskey?  While the history of it is not fully documented the story entails the dilution of whiskey, post civil war, by traders transporting the goods.  These traders were allowed a daily allotment of the whiskey as part of the deal for its transportation, but whiskey was a valuable commodity and anything they drank meant less money at the final destination.  With this in mind traders “added” certain foreign substances to the whiskey to make up for the losses.  One of the primary ingredients added was river water.  Other items mixed into the whiskey included molasses, red pepper, tobacco (used primarily for color), black sugar, gun powder, and rattlesnake heads.

I had the entertaining experience of trying some trade whiskey at one of Colorado’s top rated steak houses The Fort.  The Fort is a recreation of Bent’s Fort, an Army Military stronghold built in the 1800’s.  The Fort has served dignitaries from around the world as well as a local bear.  It is a very fun environment and the food is something that should not be missed.  As for the drink, their recipe consists of bourbon (Old Crow), red pepper, gun powder, and tobacco.  So how did it taste?  Here is my review! 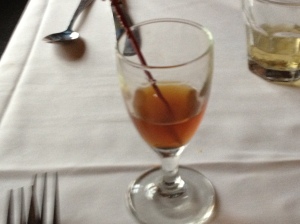 My half consumed Trade Whiskey!

Appearance: Cloudy with impurities floating throughout the drink, although that is the point.  The color tended towards pale to full gold but this is misleading due to the addition of red pepper and tobacco.

Aroma:  weak and light, there were not a lot of scents from this drink surprisingly enough.  This may be due to a poor nosing environment or simply the low shelf liquor.  A touch of corn and weak spice came through, but not enough to make an impression.

Taste:  as one might imagine a bit of the red pepper came through as did a noticeable metallic taste I am assuming came from the gun powder.  The tobacco made almost no appearance.  Some light bourbon flavors in the form of corn, light butter and fleeting hits of caramel are present, but most noticeable was this does taste a bit “watered” down.  I did speak with the bar tender and he assured me there was no water added.

Finish: the finish was very light and short.  Nothing really stood out or made any type of impression other than “watered” and light alcohol.

WHAT!!!!! Again???!!!  Yes!  While not a complex drink or offering much, it is like drinking a piece of history.  It is more than fun holding in your hand a spirit that has red pepper and tobacco, and hey let’s add some gun powder just for the fun of it!  It is an experience I do recommend and yes, the connoisseur in us will be let down but the adventurer will have a blast!

I am a gamer, musician, business man, and lover of whiskey! While I have many passions, whiskey is at the forefront and I look for any opportunity to discuss and imbibe it!
View all posts by whiskyben →
This entry was posted in Bourbon, Uncategorized and tagged bourbon, bourbon whiskey, Cayenne, Colorado, Drink, food, Food and Drink Related, Liquor, Liquor and Wine, review, Tobacco, whiskey review, Whisky, whisky review, Wine tasting descriptors. Bookmark the permalink.